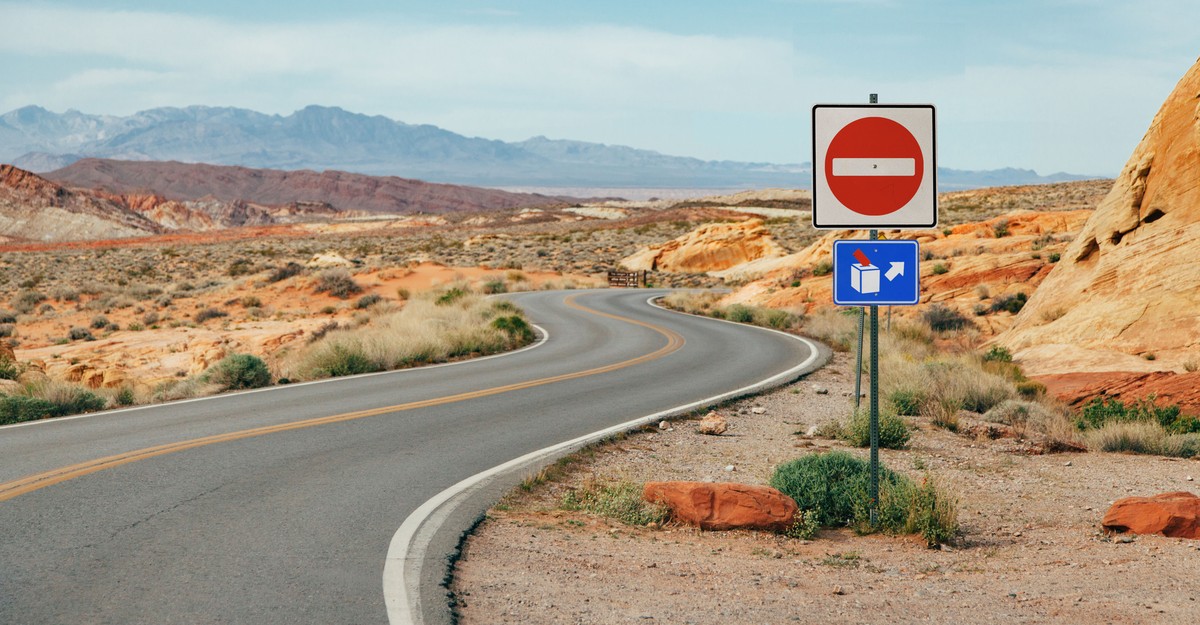 Outside the Maricopa County tabulation center last weekend, a few dozen outraged Arizonans paced single file along the sidewalk waving KARI LAKE flags. Through megaphones, some of them denounced imaginary corruption schemes and clamored for a “redo” election. Others chanted the Lord’s Prayer, like the musicians on the Titanic playing hymns to calm the passengers.

The noteworthy thing about the Maricopa protest, though, wasn’t the scene. It was its singularity. Two years ago, shouts of “Stop the steal!” could be heard across the country in nearly every state. This year, the refrain was largely limited to one block in downtown Phoenix, where at times reporters outnumbered the demonstrators.

If any state was going to devolve into chaos after a disappointing election for Republicans, it would have been Arizona—ground zero for election denial in 2020, and where this year, primary voters nominated an entire slate of fringe election cranks to all of the state’s major offices. Instead, the midterms delivered a sure blow to the election-denial movement, both there and everywhere else: The most prominent conspiracists, such as the Arizona secretary-of-state candidate Mark Finchem and Pennsylvania’s Doug Mastriano, lost by significant margins; some of these candidates even acknowledged their losses by—surprise!—actually conceding. On Monday night, Lake was declared the loser in her race for Arizona’s governorship, adding a final note to what has seemed like a comprehensive repudiation of the denialists. And where experts and reporters had anticipated widespread election-fraud mayhem, nothing close to it has yet emerged.

It would be foolish, though, to pronounce “Stop the Steal” dead. The movement may have fizzled without Donald Trump, but if he runs again in 2024, we haven’t seen the last of it. Even if Trump isn’t on the ballot, an entire swath of the Republican Party is now open to the idea that any narrow loss can be blamed on fraud. Trust in elections among rank-and-file GOP voters remains low, and in some respects has gotten worse, according to a recent survey from the Pew Research Center. The damage inflicted in 2020 endures. “He’s broken the seal,” Sarah Longwell, the publisher of The Bulwark, told me. Election denial “is part of our politics now.”

Things could have been so much worse.

Ahead of the election, poll workers in Arizona and beyond feared for their safety, and the Lawyers’ Committee for Civil Rights Under Law reported an uptick in calls to its Election Protection hotline. In the Phoenix suburbs, armed men were patrolling ballot drop-off sites. The day before the election, I watched a group of women stake out a ballot box, studying voters through binoculars for signs of cheating. The central counting facility in downtown Phoenix was fenced off with a ring of plastic Jersey barriers, and police patrolled the streets on horseback.

Election officials in Maricopa County, who appeared very tightly wound, held a press conference to get ahead of any potential claims of election chicanery. A time-consuming vote count does not indicate fraud, they reminded the room full of reporters; ballots are processed and reviewed by bipartisan teams; tabulation machines work.

Unfortunately, events on Election Day quickly undermined those careful efforts at reassurance. The sun had not yet risen when the first handful of tabulation machines stopped reading ballots. By midday, dozens of machines were malfunctioning at polling sites throughout the county. Voters at those sites were told to feed their ballots into “Door 3,” a regrettably sinister-sounding name for a secure slot that would sort the misread ballots to be counted later. And they would be counted later, as officials reassured voters in a series of follow-up press conferences.

Voters I spoke with were understandably confused and frustrated. And the malfunctioning machines had state GOP leaders immediately taking to Twitter to suggest wrongdoing. “They are incompetent and/or engaging in malfeasance just like in 2020,” GOP Chair Kelli Ward posted. Those complaints spiraled into partisan hysteria as the counting went on. Frustrated MAGA commentators suggested that Maricopa County officials had engaged in outright corruption and “CIVIC TERRORISM.” Finchem accused them of “screwing with the election counts.”

Still, despite those initial glitches and dark mutterings, Election Day unfolded mostly without threats or funny business. Poll workers weren’t harmed, and voters were, for the most part, not intimidated. Almost everyone on the America First Secretary of State Coalition slate lost last week, including Michigan’s Kristina Karamo, who’d described Democrats as having a “satanic agenda”; Finchem, the mustachioed Oath Keeper of Arizona; and the head of the coalition himself, Nevada’s Jim Marchant.

Parroting Trump’s election lies got many Republican candidates across the finish line in their primary. Finchem’s repeated election-fraud claims won him a regular spot on Steve Bannon’s War Room podcast. The former president has praised Lake’s commitment to the bit, too, reportedly telling donors that even if asked about the weather, Lake would find a way to bring the conversation back to 2020. But these wild claims proved poisonous to moderates and swing voters—polling suggests that some went to the polls explicitly to vote against deniers. We know this because many Republicans who didn’t traffic in election lies performed well: Brian Kemp beat Stacey Abrams by almost eight points in the Georgia governor’s race. In Florida, Governor Ron DeSantis won reelection by nearly 20 points.

Fans of democracy can take heart that only 14 out of 94 election deniers won in races for positions that oversee elections, including secretary of state, attorney general, and governor, according to States United Action, a nonpartisan nonprofit that advocates for election integrity. Of those 14, only five candidates were not incumbents. “The movement is still not gaining ground,” Joanna Lydgate, the CEO of States United Action, told me.

That things didn’t turn out worse is a relief, given the chaos of 2020. But the dynamic of this year’s election was different in a few important ways. Republicans were on the defensive back then: The general election was a national referendum on their president. This year, Trump himself wasn’t on the ballot—whereas, in 2020, he had spent months priming the base to blame polling fraud if he lost. It’s clear now that nobody does Stop the Steal like 45.

“The thing that gives you power as an election denier is that people believe you, and Trump was able to make people believe him,” Longwell told me. Few other candidates have that power, and none in this midterm election could nationalize the issue as he did in the presidential contest. This time, the GOP had no central character over whom Trump supporters could feel outraged.

Yet the election-fraud fires that Trump and his allies have fanned for so long will not be easily extinguished. If repeated audits and cold evidence haven’t done enough to deter conspiracists these past two years, then a disappointing midterm cycle won’t dissuade them either.

Election deniers didn’t win in swing states, but elsewhere they did. Four of them will oversee elections in Indiana, Wyoming, Alabama, and South Dakota. More than 200 Republicans running for Congress and statewide positions who’d questioned the legitimacy of the 2020 election won or retained their office last week, including more than 180 in the House. Other election deniers won at the state level in ultraconservative districts across the country. These ruby-red areas might sink deeper into denial, creating islands where both voters and officials are debilitatingly distrustful of elections.

Read: ‘Stop the Steal’ is a metaphor

Take Cochise County, Arizona. There, 170 miles southeast of Phoenix, some GOP election officials have been hankering to do a full hand-count audit in the election. Paradoxically, Republican candidates won handily there both this year and in 2020, so no obvious motive for distrusting the results is apparent. But the years-long drumbeat of misinformation from the state GOP chair, Ward, and her allied band of election-fraud kooks have nurtured a deep suspicion of the whole process.

Republican leaders in Arizona don’t believe in machine tabulation and view hand counts as the purest, most accurate way to tally votes—never mind the extensive evidence that the opposite is true. This year, Cochise County tried to forge ahead with a full hand-count audit, even after a judge ordered local officials not to. Only a timely ruling from the Arizona Supreme Court last week kept them from carrying one out. “What I’ll be doing over the next two years is looking at these counties that have gone really hard to the right,” Jessica Huseman, the editorial director of Votebeat, a nonpartisan election-news outlet, told me. “Because there’s no one to push back.”

Even in states where election deniers lost, voters have been primed to suspect outcomes they don’t like, glitches they don’t understand, and delays in counting. “If [Lake] doesn’t announce that she’s going to win tonight, we might have to go through like a week or so of shenanigans—the same shenanigans that they pulled in 2020,” Stephen Tenner, a former actor from New York, told me at a lavish GOP Election Night party in Scottsdale. “We’re waiting for it this time; we weren’t ready last time. So we’re going to catch the fraud.”

Other Republicans I interviewed were less persuaded of the likelihood of fraud, but were comfortable entertaining the idea. “I’d like to go back to same-day voting and paper ballots. There are problems with machines,” a man named William from Phoenix, who declined to give his last name, told me at the party. Would he blame fraud if Republicans lost? I asked. “Well, there were problems with the elections two years ago,” he said, adding that, this time around, Secretary of State Katie Hobbs should have recused herself from official duties during the election. “I would be hesitant to say I thought [this one] was completely honest.”

The thing about trust is that it’s painstakingly hard to build and relatively easy to demolish. Election denial is now a chronic wound in America’s body politic, only partially healed, and ready to reopen—red and raw—whenever circumstances permit. Those circumstances may arise sooner rather than later if Trump is on the ballot again in 2024. Even if he isn’t, the former president has already broken the tradition of gracious presidential concessions and peaceful transfers of power. He’s encouraged a populist animus toward institutions that will likely remain a litmus test for future Republican candidates. And more than anything, Trump has created a blueprint for exploiting the messiness and complexity of America’s elections. An audience for this type of exploitation is still out there, if Republicans want to take advantage of it.

On Monday, after Maricopa County released a decisive batch of ballots that led all major news networks to declare Hobbs the next governor of Arizona, a few members of Team Lake sprang into action to ensure that any ballots with errors were quickly cured. That’s a standard and legitimate procedure in elections, and can be helpful in especially close ones. But other Republicans continued to follow the denialist script. Ward accused Maricopa County of voter suppression. Finchem, the failed secretary-of-state candidate, began to do the impossible calculations. “I should win by 3% and @KariLake should win by 11%,” he tweeted. “If that doesn’t happen you know the real story.”

Lake’s own account was silent for more than an hour after the networks had called the race. After all of this, would this cycle’s Stop the Steal standard-bearer actually concede? The answer came at 10:30 p.m. eastern, with a simple tweet: “Arizonans know BS when they see it,” Lake wrote.